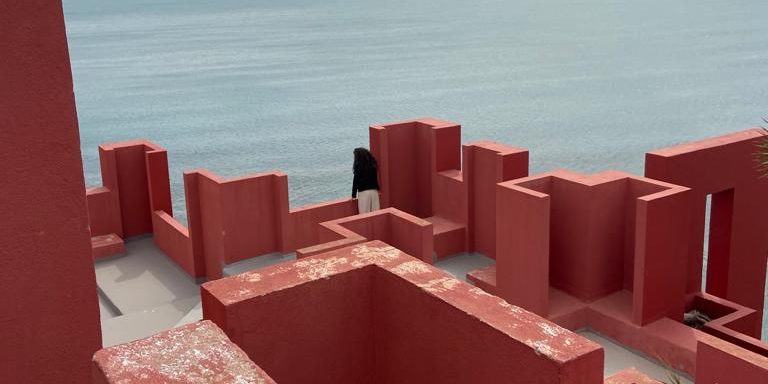 From the outside it gives the impression of being newer than it really is, since it was built in the 14th century, but it has had a lot of restoration to keep it standing today. It is considered one of the most important stately mansions of the Crown of Aragon.

Architecturally we can highlight the Gothic Patio de Armas and the Golden Gallery, from the s. XVII, with original tiles from the time, my favorite part was the neo-gothic chapel with its impressive blue ceiling. Francisco de Borja’s room is preserved practically as it was back then and it is not allowed to step on it, it can only be seen from the outside.

The visit program is very varied, this summer I did the guided night tour and I loved it, the guides were very well prepared and we visited areas that are normally closed for daytime visits, such as a cave where they stored water.
In addition to daytime and nighttime guided tours, they also offer theatrical tours and in summer there are very interesting proposals such as alternative cinema on Thursdays or the option of dining in the large courtyard or concerts with catering. It is a true wonder and I feel very proud that Gandía makes innovative proposals as this ones to promote historical places like this.

King Jaime II the Just, granted in 1323 the lordship of Gandia to his son the infant Pere. Alfonso de Aragón el Viejo, son of the former, later inherited this manor (1359) and raised it to the category of Royal Duchy in 1399. It was “Alfonso el Vell who began the construction of the palace.

In the year 1485 Rodrigo de Borja, (future Pope Alexander VI), after satisfying a debt that King Ferdinand the Catholic had, since 1470, with the city of Valencia, where Gandía acted as pledge, bought the Duchy of Gandía , for his son Pedro Luis de Borja (Borgia), who became the first Duke of Gandía. 1

With the arrival of the Borja family, the building will be enlarged and modified. Pedro Luis, María Enríquez de Luna and Francisco de Borja left their mark between the 15th and 16th centuries. The remodeling of the Hall of Crowns corresponds to this period.

In the Baroque period, the Duke and Duchess of Borja gave the building a new air with the remodeling of the Águilas room and the construction of the Golden Gallery, carried out to commemorate the canonization of Francisco de Borja.

In 1788, the painter Francisco de Goya set the scene of his great painting San Francisco de Borja saying goodbye to his family, commissioned by the Dukes of Osuna for the Cathedral of Valencia, where it is preserved, on the steps of the patio.

After the death of the eleventh Duke of Borja without issue, the dukedom and the building passed into the hands of noble families, who normally did not reside in Gandia. For practically a century the building remained abandoned, until in 1890, the Society of Jesus acquired the property, which was practically in ruins, at public auction.

An important restoration will be carried out in the palace whose purpose was to consolidate all the spaces of the building and promote a whole new artistic decoration aimed at elevating the figure of San Francisco de Borja. The construction of the Neo-Gothic Chapel and the refurbishment of the Oratory or Holy Chapel of the Doge’s Palace should be highlighted from that period.